Above you, the craggy face of the cliff seems to stretch up endlessly toward the sky, offering perilously few footholds. In the far distance there’s a small village by a beach, bathed in orange sunshine – an exotic idyll. But below you there is … nothing. Nothing but a long deadly drop into the crashing sea far below. Your only option is to keep climbing.

Crytek has always been interested in pushing graphics technology. In the mid-2000s, the Frankfurt-based developer and publisher achieved wide acclaim for its visually spectacular first-person shooters Far Cry and Crysis; although several years old, both are still widely used as a benchmark for near photo-realism in games, especially in terms of environmental detail. With its steamy tropical rain forests, Far Cry presented a lush counterpoint to the genre’s obsession with steel grey interiors.

But the company’s latest project is perhaps its most ambitious attempt to bring immersive naturalism to game worlds. The Climb is a virtual reality climbing simulator, which gives the player the chance to attempt a series of tricky ascents on rock faces based around the world. “We started out by working on the mechanics of virtual reality,” says executive producer Elijah Freeman, who started as an artist at Crytek 15 years ago. “When we were prototyping, climbing just stood out for us – it was almost instantaneously fun.”

Exclusive to the forthcoming Oculus Rift headset, The Climb uses the technology’s motion controllers – or an Xbox One pad – to give the player control over their hands, which are the only body part displayed on screen. While the shoulder buttons can be used to grip with either your left or right hand, you need to use the motion sensors in the headset to physically look at the next finger hold that you want to grab for – this then forces the onscreen limbs to move in that direction. It takes a few minutes to get used to. At first your arms flail uselessly short of the required hold, and when you do get the direction right, you may mistime the gripping mechanism, sending your climber into the abyss.

But as I found during my demo session, based on Vietnam’s Halong Bay, the interface gradually becomes intuitive. You learn to scan the rockface for available holds, you learn to plan ahead, using the correct arm to lurch up with, based on its position to your body and the location of the next hold. Eventually you build up a rhythm where you start to scamper up the cliff like Spider-Man on his summer hols.

Although there are arrows on each climbing surface to point out a general direction, Freeman says there will be multiple routes available on tougher climbs, allowing players to learn and finesse their favourites – an asynchronous multiplayer mode lets you compare route times with friends. Adding an extra layer of authenticity, you also have to watch a grip meter in the corner of the screen: if it gets too low, you need to chalk up your hands, or your fingers will start slipping from the ledges. It’s a small addition, but it just keeps that sense of physicality – that sense that you’re actually out there dangling from a 200ft cliff. 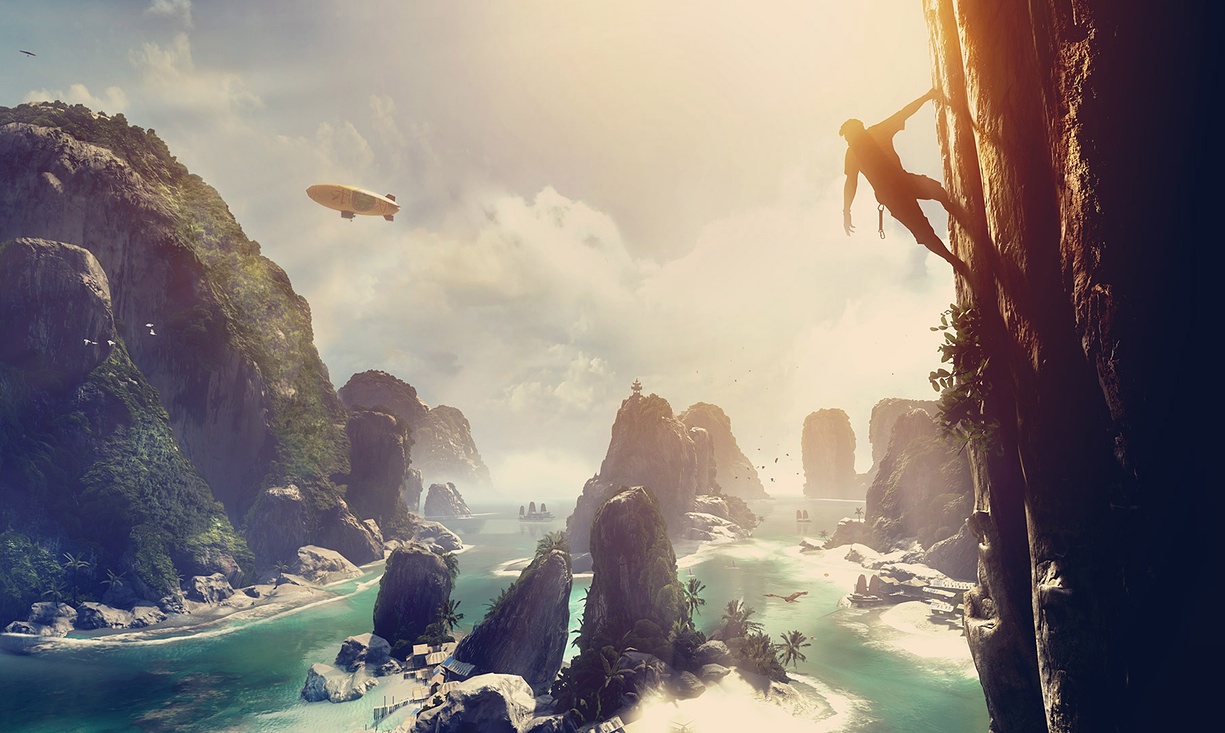 Fancy the sensation of dangling from a 200ft cliff? Then The Climb is for you. Photograph: Crytek

And the game does likes to mess with your natural fear of heights. There are sections where you’re required to climb downwards, edging over the lip of a rocky outcrop so that all you can see below you is that beckoning expanse of water. The action is so measured and precise it’s unlikely anyone is going to suffer motion sickness, but vertigo is quite another thing. Basically, if you have to look away during all of Tom Cruise’s free climbing sequences in the Mission Impossible films, this is going to be an interesting challenge.

Then there’s the jumping. Some holds are just too far away to just reach for, so you need to hit a button and launch yourself across. I found this the most challenging and frustrating part of the demo – simply because the timing required to hit the grip button and hang on to the target ledge requires a level of precision which is tough to achieve when you’re combining inexact motion controls with a joypad input. When I did make it, it seemed more by luck than judgement. Fortunately, there are various save points on each climb – disguised as pitons obviously – so unlike in the real sport, you get to have another go if you plunge to a watery grave.

The experience is a fascinating glimpse at the strengths of VR as a medium. While beautiful environmental details look impressive on a 2D display, they feel truly fascinating and immersive in VR – each time you reach a new cliff top and get to survey the scenery, it feels like a genuine reward, rather than a mere pretty backdrop. “Visual fidelity is an important part of extrapolating on presence,” says Freeman. “You need to feel like you’re there. Crytek has spent a lot of time on getting our CryEngine to render at these fidelities so it was a natural fit for us.”

Because of this extended sense of “being there” the actual physical input doesn’t have to be so frenzied and demanding. If this were a traditional simulation on a 2D display, it’s likely every button on the controller would be employed; there would be balance, wind and directional gauges. Here, because the sensory input is more complex, the developers don’t need to add such complexity to the interface.

Indeed, the minimal controls seem to work perfectly well – the sense of actually being on the rock face augments the sense of achievement and challenge. We’ve heard a lot from VR developers over the past two years that early titles using the Oculus, HTC Vive or PlayStation VR headsets are likely to be experiential rather than narrative in focus – they’ll be about inhabiting and exploring a defined space, rather than following some sort of epic story. The Climb confirms this. It may not function as a “realistic” climbing simulation (you can’t see or use your feet for example), but it is certainly about being somewhere and experiencing the traversal of a precarious space.

“The amount of fun is balanced very finely with the sense of risk and excitement,” says Freeman. “I like the idea of presenting experiences like this to the player. This is just the initial pass to get people introduced to VR, but you can definitely see where this medium is going.”

Written by: Keith Stuart, the Guardian (via Presence)
Posted by: Situated Research