Rockstar Games was nice enough to send us a copy of Red Dead Redemption to try out. After spending time playing the game, we recommend grabbing a copy.

For those that saw my status last week, I said I was ‘testing’ the game. By ‘testing’ I meant ‘playing’, and as such this will be an informal review / opinion of the game, not meant at all to reflect Situated Research’s game research services. Game research requires several users (not using the researcher) and lots and lots of in-depth analysis. This review is simply based on a weekend of having fun playing the game.

Graphics in the game were outstanding. Rockstar did a great job at harnessing the power of the Xbox360 and created a vivid, realistic depiction of the Old West, as shown below: 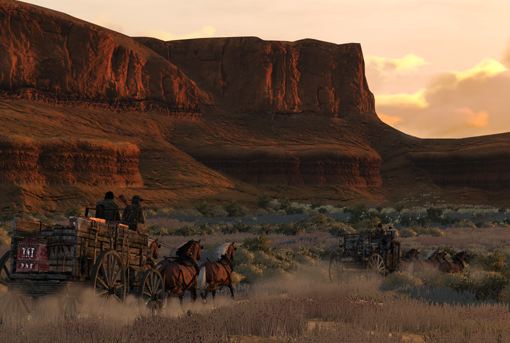 The game scenery added a lot of ‘flow’ to the game, and helped pull me into the situations created by the game, adding to the engagement.

One minor area that might benefit from some future work would be to further develop the character faces. This was no big deal during action scenes in the game, but I noticed that it broke some of the engagement during some of the video ‘set-up’ scenes before a mission, where there was a lot of human interaction going on. During these times, I tended to more closely watch the characters, and it was obvious enough that they were not real. Interactions are rich in the game: talking and interacting with other characters in the game is great; but player engagement in the close-up scenes would benefit from more life-like faces.

Gameplay in Red Dead Redemption is great. Having played its predecessor, Red Dead Revolver, the controls were similar and easy to pick up. For new players, instructions on controlling particular game features, such as riding your horse, shooting your gun, changing weapons, etc. are given on the fly, which was great. Rockstar did an excellent job of utilizing ‘situated learning’ by presenting information on a need-to-know basis, integrated with gameplay. Rather than forcing game players through a boring tutorial where controls need to be memorized, a guide will help you through an item’s first use, teaching controls for just that item in an environment where the item can be immediately applied. This spreads the learning out so players can focus on learning a feature at a time in a context where it can be applied, and advanced users are allowed to skip the help if they already know what to do and just want to play. Excellent job, Rockstar.

Gun battles, one of the primary ‘Old West’ activities in the game, were a lot of fun, and exciting. Rockstar did a good job at balancing the difficulty of each battle: each battle can be won with the right amount of skill, but realistically, mistakes can cost your your life (requiring you to restart the mission). Typically you must get shot a couple of times before dying, each time with the warning becoming more obvious as the screen turns red and sound gets muffled. This teaches the player to hide behind barriers and slowly advance on enemies, and use strategy in clearing them out. Most missions were great, however I noticed that in several I was unable to shoot in the ‘crouched’ position, and had to stand up fully to shoot back at enemies (making myself an easy target). I think this was due to the barrier being just barely too high to aim the weapon over the top of it.

One small item that might be improved is the game mini-map. In the lower-left corner of the screen, a Rockstar-esque mini-map is available as players move around in the game, alerting them to nearby characters, shops and missions that can be played. The mini-map is a great idea, conceptually, but could use some improvement in the way it displays items. I frequently found myself chasing down a symbol on the map, having no clue how far away it was. While a larger map showing distance is available (by pressing the ‘Start’ and ‘Back’ buttons, players can use particular in-game items or look at a large map), I typically avoided doing so as gameplay is interrupted. Again, the mini-map is a great concept, as it tells game players where they can go without interrupting gameplay, but might benefit from some usability testing to improve the affordances presented to the player and increase its utility in the game. 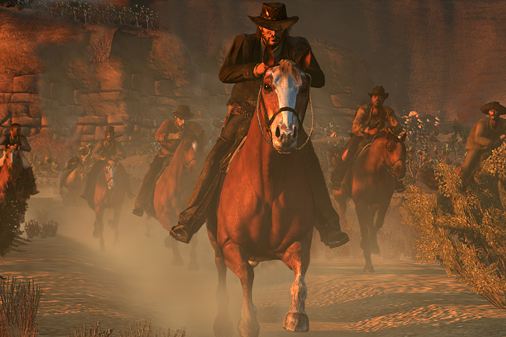 Overall, the game is a lot of fun, and I will continue to play in my spare time. A high degree of personalization is available: players can customize their weapons, wardrobe, and personality, with choices to be good or bad (or ugly) resulting in different gameplay and interaction as a result. The game has a few quirks that could be worked out, but almost every other game does too. What matters most is that this game is fun to play. The game player is able to choose their own pace- while riding around between missions can get tiresome, the game offers small mini-missions in random locations, and the ability to travel between towns (in effect, a cut-scene) to the next mission. This helps game players move at their own pace in the game: some may want to quickly move from mission to mission, while others might enjoy the game’s beautiful western scenery and subplots from interacting with people and objects across the countryside.

Bottom line: if you want to have fun as a gunslinger in the Old West, grab this game. To help sway you, check out the screenshots of the game from Rockstar’s website.